Clusters and Surfaces under Intense Excitation – The SIMPA installation: the multicharged ion source and its beam line

The team has an ion source installed in a room close by to the Van De Graaf accelerator (INSP, Pierre and Marie Curie campus).

It is a SUPERNANOGAN type source from the PANTECHNIK company allowing the production of multicharged ions (such as neon or helium-like argon or even naked argon) with an energy of several q.keV. A complete ion transport line is also implemented next to the source (focusing solenoid, analysis magnet, electrostatic and magnetostatic deflectors) which allows to drive the ion beam towards the interaction zone.

The ion source is an electronic cyclotron resonance ion source (ECRIS -SuperNanogan type) developed by the company Pantechnik. Installed in the Jussieu campus, this multicharged ion source is mounted on a 30kV platform installed in a Faraday cage. 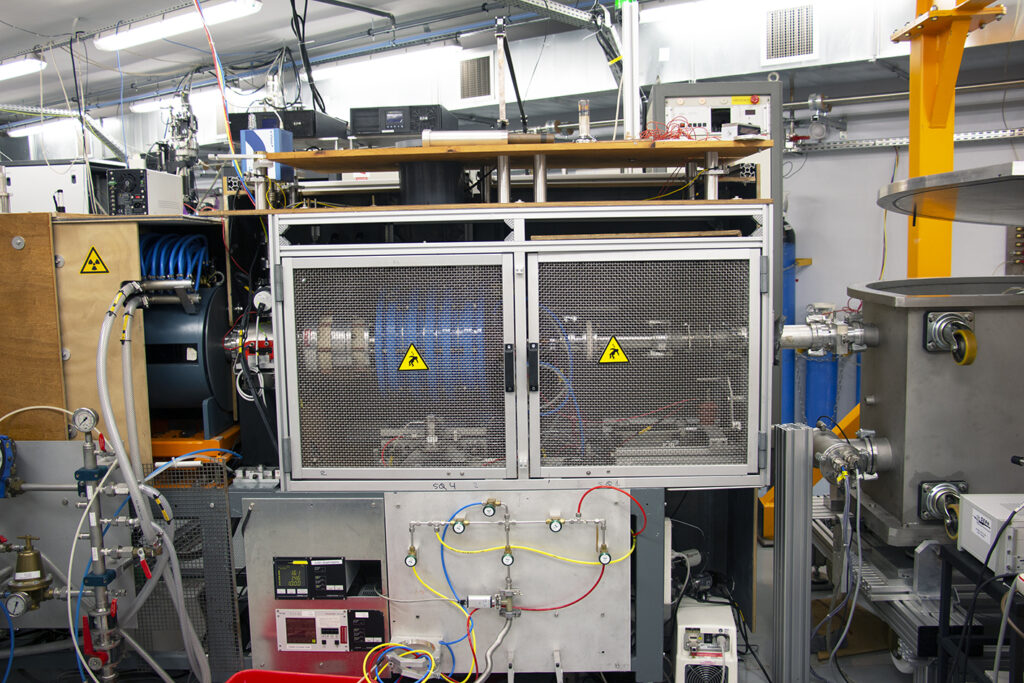 Permanent magnets (blue parts on the pictures below), present all around the plasma chamber following a hexapolar arrangement, allow an axial and radial confinement of the plasma following the principle of a magnetic bottle. 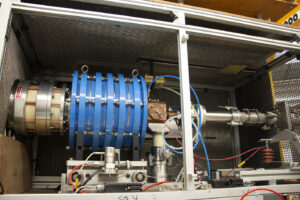 The microwave input, generated by a klystron operating at 14 GHz (type GXP 20 KP) and driven by a rectangular waveguide, is located at the copper injection cube. In particular, we were able to operate at powers of 900W, higher than the manufacturer’s specifications, thus allowing an improvement in performance. The microwaves, as well as the carrier gas, are guided at the level of the polarization electrode (set at a high voltage) to the plasma chamber.

The extraction electrode, located at the exit of the source and grounded, pulls the ions out of the plasma chamber and gives them an energy of about ten q.keV.

After the actual source body, a mass quadrupole (Pfeiffer QMS) precisely analyzes the partial pressures of the residual gas in order to check, in particular, the operating stability of the source. 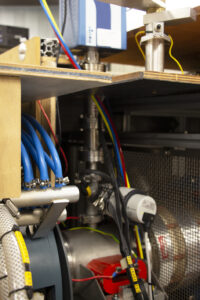 Caption: Solenoid for focusing the beam extracted from the plasma chamber followed by horizontal and vertical slits to cut the ion beam if necessary. © INSP

Once extracted, this beam is focused with the help of an intense magnetic field induced by a solenoid whose temperature regulation is ensured by a water cooling system. A set of slits (horizontal and vertical) also conditions the geometrical shape of the beam before the selection in terms of charged state of the ions.

Then, a magnetic dipole operates a q/m selection of the incident beam in order to obtain ion beams containing a single charge state (q) of a single chemical species. The beam at the exit of the magnetic dipole is then at 90° of the beam at the exit of the source. Since the reassembly of the experimental device in 2003, a whole range of ion beams have been obtained: neon (q < 10+), argon (q < 17+), krypton (q < 19+) and oxygen (q < 8+). 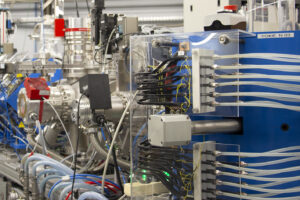 Finally, these ions are guided towards the interaction chamber by a whole series of ion optics (electrostatic and magnetic deflectors, electrostatic Einzel lens) and the ion beam can also be reshaped by 2 sets of horizontal and vertical slits. 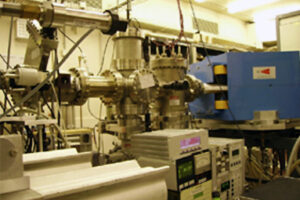 At the level of the magnetic dipole, a magnetic field scan allows to observe the ionic species produced. Opposite, an example is given in the case of argon ions with a kinetic energy of 10 q.keV. 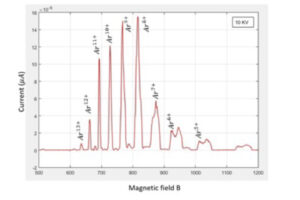 The whole beam line (from the injection to the interaction chamber) is maintained under a secondary vacuum between 10-7 at the extraction level and 10-10 mbar at the interaction chamber, by a complete set of turbo-molecular, cryogenic, ionic and primary pumps. In the same way, several sensors allow the control of the vacuum all along the line of the SIMPA device. At present, two Faraday cups (one located just after the analysis magnet and the other at the level of the interaction chamber) allow a precise measurement of the ion beam currents.