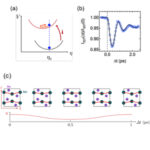 MnAs is a semi-metal that has attracted considerable interest since its discovery in the early 1900s. Current research on MnAs is motivated by its applications in spintronic devices or as a magnetocaloric material. The giant magnetocaloric effect of MnAs is directly related to an unusual sequence of magneto-structural phase transitions, the mechanisms governing these transitions not yet fully understood. Recent calculations suggest the involvement of a soft phonon (a mode of vibration whose frequency vanishes at the phase transition temperature). By using time-resolved diffraction measurements, an INSP team, in collaboration with LCLS researchers at Stanford, SOLEIL and ELETTRA synchrotrons, and the Beijing Semiconductor Institute, was able to identify this mode as an oscillation of atomic positions along the orthorhombic-hexagonal transition path of MnAs.

Caption: (a) Principle of the excitation of coherent phonons by a laser pulse, (b) Intensity of the 307 Bragg reflection as a function of pump-probe delay, (c) atomic movements corresponding to the probed mode within MnAs cell.