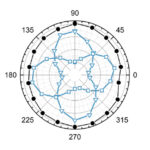 Among the II-VI semiconductor heterostructures at the heart of optoelectronic and spintronic applications, one finds the colloidal core-crown nanoplatelets whose thickness is controlled at the level of the atomic monolayer. Synthesized for the first time in 2014, they arouse a growing interest due to their relatively easy synthesis and their remarkable optical and electronic properties closely related to the generation of indirect excitons. These latter are photo-created with an electron in the core (CdSe) and a hole in the crown (CdTe), which leads to a poor overlap of the wave functions of both particles and to a long life of these excitations. Studies of the fine structure and spin physics of such indirect excitons are essential steps in the race for applications, and have not yet been addressed. This is why the Phocos team at INSP in collaboration with the LPEM of the ESPCI, the Universities of Cambridge, Linköping, Radboud and Sydney explored these topics through polarization and time-resolved luminescence experiments as a function of the temperature and under strong magnetic field, and showed the strong applicative potential of such colloidal heterostructures CdSe/CdTe.