Energy – Light-emitting diodes based on nanocrystals

Nanocrystals are semiconductor nanoparticles that fluoresce. They are an example of nanotechnology that has found a consumer application as a source of green and red light in displays. The current devices rely on an optical excitation of the nanocrystals by a blue diode based on GaN technology. The challenge is now to develop light-emitting diodes to replace the optical excitation by an electrical excitation. This should allow to obtain a better contrast but also to reduce the electrical consumption of the screens. 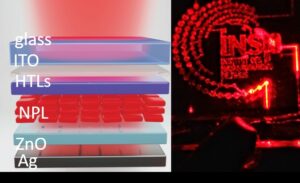 Caption: On the left, schematic of a 2D nanocrystal-based light-emitting diode. On the right: INSP’s electroluminescent logo.

Another application of these diodes is to extend their spectral range to the infrared this time for applications related to the detection of gas or for the lighting of aircraft landing strips. Another example of application is illustrated below where we see, under infrared lighting, the humidity spots appear with a much better contrast than in the visible. We are therefore working on the development of infrared LEDs that can emit between 1 and 2 µm, in a spectral range where OLEDs do not work.

Caption: Left: Schematic of an infrared nanocrystal-based light-emitting diode. Right: Infrared image of a moisture stain on a cookie under illumination by an infrared LED whose emissive layer is made of HgTe nanocrystals.