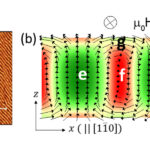 n a ferromagnetic material, an excitation can produce a precessional movement of magnetic moments at frequencies in the range of 1 GHz or higher. This excitation can be triggered by light (Brillouin scattering), microwaves (ferromagnetic resonance), electric current (spin transfer) or acoustic waves. During precession, the magnetic moments can move in phase (wave vector k = 0) or with a certain phase shift (wave vector k ≠ 0). In the latter case, we speak of spin waves. Physicists have recently been interested in the propagation of spin waves in magnonic crystals (like photonic crystals but having a periodic magnetic configuration) for applications in the transport and processing of information.

Members of the team «Growth and properties of hybrid systems in thin layers» at the INSP carried out a complete study of the magnetization dynamics of a nitrogen-implanted iron thin film , which naturally has a periodic and highly ordered magnetic configuration, typical of magnonic crystals (FIG. 1). This study deals with the magnetic excitations of this periodic system as a function of the external magnetic field at k = 0. This study, based on Brillouin scattering measurements (in collaboration with the University of Perugia), broadband ferromagnetic resonance measurements (INSP) and micromagnetic simulations (Mumax3, INSP), has a two-fold interest: the spatial distribution of excited modes is studied in detail and the sensitivity of experimental techniques is discussed using selection rules. This last point, very general, allows us to better take advantage of the complementarity of the spectroscopic methods, to grasp the dynamics of magnonic crystals.